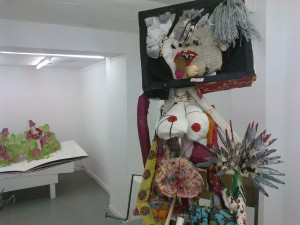 Joshua Raffell makes work that invites – insists on – the viewer’s participation: we turn handles, peer into peepholes, are shocked and/or amused, and question our shock or amusement. Some of us try not to look, try to stop others looking, for their own sake. His work has been vandalised, censored, and damaged by over-enthusiastic cranking. He has driven it through the streets of central London on the back of a bike, and parked it in Trafalgar Square for the enjoyment of tourists. For the last few years he has concentrated on dolls, stitching together miscellaneous scraps of fabric into monstrous masturbating polygendered figures (that’s where the cranking comes in). Now, for his first solo show at studio1.1, where he was artist in residence 2011-12, he is taking his art back to its natural habitat, the seaside pier amusement arcade. Boxes and other receptacles will have holes in the side, inviting us to bend and peep. What we see might stop us sleeping: inside the box there’s more than the butler ever saw, as Dario Argento meets Donald McGill.

In his own words:

‘I’m looking at the debauchery and the underbelly of society, I’m interested in scratching the surface and seeing what lies beneath…

My works are awkward and brash like an old toy played with and torn. The craft is in the making and breaking, the cutting and re-sewing. The taking of an idea, simplifying, reworking, until some sort of outcome is achieved. Allbeit momentarily. It’s playful, over the top and naughty. I put things out of context and in your face…’ 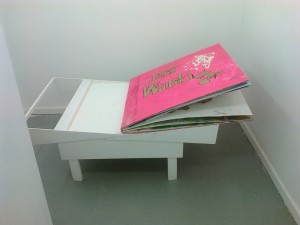 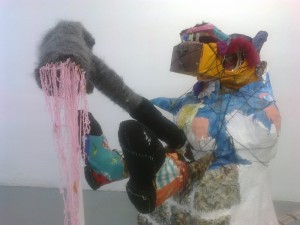